Last week I was interviewed by Victoria Park Baptist Church in Bristol about my song Where Are You God? This was used as part of their online church service and helped to inspire their prayers for the coming week. They asked me some deep, soul searching questions such as “do you think any good can come out the pandemic?” and we explored my reasons for being so honest with how I felt about the current global crisis. You can see the interview below. 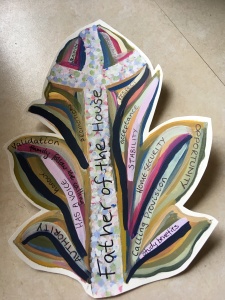 Artists Have Big Mouths… And we have a responsibility to speak out about issues that concern others as well as ourselves. Art is about creating something beautiful, but sometimes it can also be about reflecting the ugliness, injustice, unfairness or the fractured nature of the world. An artist should represent the world as they see it. It’s about using our gifts to help others as well as entertaining.

I’m always looking for new and creative ways to use art to promote causes or make a statement in the public arena. Back in May of this year, I was asked, along with a group of other artists, to create some art for a political protest that would highlight the differences in the gender pay gap for ministers in the Baptist Union. The project was presented to the Baptist Council at the beginning of November and was installed in secret before the meeting started so that no-one knew that it was on the agenda. The art installation was a response to a survey of salaries and benefits across the national ministerial spectrum.

All the artists were asked to create a leaf in any medium or style that represented one of the respondents from the survey: I was given the profile of a senior male minister on full benefits and salary. None of the artists knew what what the rest of the team were creating; this meant that each leaf was unique and distinct from the others, highlighting our individuality and the uniqueness the Lord has given each of us. The project was well received and provoked conversation about how to further the study and conversation of equality within ministry. Each member of the council got to take a leaf home with them to remind them of the discussion.

It’s been an interesting and challenging project and not one that I would have have naturally gravitated to, but it’s allowed me to explore art in another arena and make art that speaks out for other people. Initially I found the protest element intimidating because of the possibility of rejection. However once I got past that I could see the true value of the project. It’s taken me outside of my comfort zone and made me think about other ways to use art writing, and music in society. Who knows where it will lead? I’ll keep protesting… the creative way.