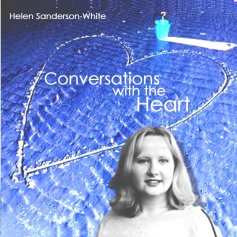 Where do the years go? Fifteen years ago on Saturday 5 June 2004, I released my first Album Conversations With The Heart. It seems like a lifetime ago now, but that album came into being by chance. I was studying for a music degree at the time and was writing bits and pieces in between that and music teaching.

A friend of mine asked me to perform at New Eden Music Festival in Torquay in the summer of 2003 and after the performance I bumped into some old friends who were also recording their work. Those are lifetime friends, Peter and Debs Brazier. A quick conversation and a swap of contact details led to me sending Pete some home demos of my songs. Before I knew it was was standing in their dining room in Paignton, singing into a microphone. I faithfully trudged up and down from North London to Paignton with piano in the boot of my car for a weekend of recording many times over a period months until the project was finished. The whole project was made on the tiniest of budgets and a lot of tea from Debs! The artwork was created by Andrew Wainwright, a friend from music college.

The album launch took place on a very hot evening at St Margaret’s Church, Uxbridge and from memory we had about eighty people there. It wasn’t just me performing that night, Sheryl Anne Ashton also sang some solos and then joined me for some duets. It’s so great to be able to perform and make music with friends!

And here I am these years on, still proudly an independent artist. I’ve had dalliances with record companies but I’ve never been made a sensible offer (just ridiculous ones!). Two albums, four EPs and lots of singles later. Still making music myself, still finding new ways to make it work. Here’s to the next fifteen years…